Carbohydrates are all foods which are plant based or come from plants. Dairy milk also has a carbohydrate component in the form of lactose, a milk sugar.
Carbohydrates are a great fuel source for our body which breaks them down into glucose, but they are not all created equal. Some have been highly refined and processed such as products made with white flour or turned into another type of food and can be high in sugar and added fat, like cookies, cakes, white bread, white pasta, some breakfast cereals, potato chips and quick noodles. These foods have little nutritional value and can contribute to high blood sugar and weight gain. They are best left for occasional eating. Rather, eat whole vegetables and fruits, whole grain cereals, breads and crackers, brown rice, quinoa, barley, and whole oats, which are full of fibre, vitamins and minerals and which slows the breakdown into glucose for longer lasting and more steady energy.

My friend has tried this 'popular diet' - should I do it too?

It’s important to understand that no diet works the same for everybody as we are all very different. There are many diets which promise quick results in weight loss.
Have a think about the reasons why you want to try this diet. If it is quick results you are after, the diet may give that, but beware rapid weight loss can be unsafe for a lot of people. Often, weight lost quickly is also regained quickly and/or harder to keep off. A quick fix also doesn’t help you learn habits and changes which will affect your health in the long term. Head to our section describing 5 popular diet types for more information about specific diets.

What’s all this talk about energy?

Energy describes what is found in foods and used in our bodies for ‘work’ like moving, breathing, heart beating, etc. It is measured in calories or kilojoules.
Calories and kilojoules are different units measuring the same thing, like miles and kilometres both measure distance.
1 calorie is equal to 4.18 kilojoules. All the foods we eat are made up of different amounts of 3 major (macro) nutrients These are carbohydrates, proteins and fats. Each macronutrient has different amounts of energy. Fat and alcohol are very high in energy. Our bodies do not use energy from alcohol well and stores the excess as fat.

Knowing how much energy is in different foods helps us make choices such as a chocolate bar (high in added fat – so very high energy) versus an apple (high in carbohydrate – lower in energy).

Should I take supplements?

Food from a varied and balanced diet that includes the four major food groups (vegetables and fruits, grains and cereals, protein, and dairy – if tolerated) should be your first option to meet all your body’s needs. Supplements are designed to be in addition to a healthy, well-balanced diet. A poor diet can’t be fixed by having some multivitamin and mineral tablets or some shakes and bars.
There are times that it is appropriate for people to take supplements, like during pregnancy and breastfeeding, or when the need for a certain nutrient is very high and it is difficult for a person to get enough such as during illness, to support healing following surgery or injury, intensive physical training and during older age.
If you think you are lacking in certain nutrients, talk to a qualified health professional such as your family doctor (G.P.), nutritionist or dietitian, or a pharmacist.

How does nutrition affect mental health?

Our brains are very sensitive to the food and drink we have and what we eat plays a big part in our mood, how our brain functions and whether we are at risk of developing conditions which affect our mental health including depression and anxiety. For a healthy brain, do the following: 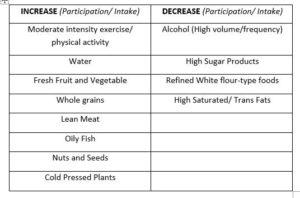 Which sweeteners are healthiest?

All sugars, no matter their source or origin eventually break down into the basic units of glucose, fructose, or galactose. Too much of these in our body can cause problems in regulating our blood sugars, damages cells, and contributes to poor mental health and gaining fat mass. Honey, maple syrup, brown sugar, molasses and treacle may be less processed and keep some trace amounts of minerals, but they are not health foods. Natural sweeteners such as stevia can be beneficial because you need less of them as they are much sweeter than regular sugar. Artificial sweeteners are often recommended for people who need to be careful in monitoring their blood glucose/sugar levels. Be aware that some artificial sweeteners by themselves have no goodness in them (they are for taste only) and can contribute to hormone disruption in our bodies over time.

Choose whole, unprocessed foods for your sweetness hit. When sugar is naturally found in the food (like fruit, vegetables, grains or dairy milk), it is much better for you- the other parts of the food like fibre and fat help slow down sugar being absorbed into the body.
So, for example, a whole apple (including the skin) is much better for your body than a glass of apple juice.

Do hormones really play a role in losing weight?

Our bodies use hormones all the time to help keep things in check. There are a number of conditions which affect hormones such as hyper- and hypothyroidism, PCOS, Addison’s disease, and Cushing’s syndrome.
Some women also find menopause tough in terms of managing weight gain.
These should be addressed by your doctor.

Chronic stress affects our bodies’ ability to relax and unwind, which can lead to being in a “wired” state all the time with lots of cortisol and adrenalin pumping through the body. This affects our digestive system, our sleep patterns, what our body does with food and drink, and how it holds onto fat stores. Large amounts of processed food with a lot of sugar and added fats also contribute to disrupting our hormones and the jobs they play. We can support our bodies by eating a well-balanced diet, exercising regularly, getting enough sleep, and reducing stress.

How much salt can I eat per day?

Salt is made up of 2 parts- sodium and chloride. We need sodium for some of the processes that make our bodies work as they should, but too much is linked with increasing the risk of developing heart disease, high blood pressure, strokes, kidney problems and may be linked with losing calcium which can lead to brittle bones.

Most of the sodium we eat is found in ready-made foods like baked goods, breads, sauces and condiments, canned beans and vegetables, spreads, crackers, biscuits, snack foods such as potato crisps, cereal bars, stocks etc. Having less processed foods can help to reduce the amount of sodium you eat.

What about iodised salt?
In New Zealand, we have low iodine in our soil which means we have low iodine in our foods. Iodine is essential for our health and particularly for development of infant’s brains. There are serious, permanent conditions caused by iodine deficiencies, so iodine is added to salt which is used in most baked goods, breads (except organic and bread mixes for making at home) made in New Zealand as well as table salt, sauces and prepared foods. You can also get iodine from seaweed and women who are pregnant are often given a supplement to make sure they have enough to support their baby’s brain development.

How much caffeine is too much?

Caffeine has a stimulating effect on our nervous system which can help us feel more alert, but can also cause issues such as poor sleep, insomnia, irritability, having the ‘jitters’, increased heart rate and anxiety as well as interfere with our body absorbing some nutrients.
Everyone processes caffeine differently, so some may tolerate more than others or be able to have it later in the day with little effect on sleep.
If you find caffeine affects your sleep, makes you feel ‘wired’ or anxious, you would be wise to limit it or consider taking it of your diet altogether.

The following guidelines around caffeine use are given:

Are canned and frozen vegetables and fruit just as good as fresh?

Here are some benefits:

Is dried fruit a good snack?

Dried fruit has a lot of fibre so it’s good for the guts. It also keeps longer than fresh fruit and is smaller- handy for travel, lunchboxes, sports activities etc. BUT because the water part of the fruit has been removed (through drying), it also means the sugar naturally in the fruit is concentrated (there’s not more, but it’s not diluted with the water part of juice). So, this means it is sticky and can cause problems by sticking to tooth enamel and creating cavities/decay.
It can also be easy to eat too much- it’s easy to eat 10 dried apricots, but you wouldn’t eat 10 fresh apricots.
Dried fruit can also have sulphites (used as preservatives and also naturally in some dried fruits). Some people are sensitive to sulphites.
Keep to small amounts of dried fruit (for example 5-6 apricots is one serve of fruit) and rinse your mouth with water or brush your teeth soon after eating. Have it only occasionally.

How do I avoid nutrient deficiency when I am a vegetarian or vegan?

Vegetarian and vegan diets can be very healthy, as long as you plan and prepare well.

There are some things to be mindful of:
1) Having enough protein. Protein from animal meat, fish and poultry is more easily absorbed and used by our bodies than plant proteins and contains all of the essential parts of protein our bodies need. To make sure you have enough protein without animal products, eat a wide range of plant proteins:• Grains (whole grains- brown rice, whole wheat, whole rolled oats etc)• Legumes and pulses (beans and peas, cooked or canned)• Nuts and seeds• Eggs• Dairy milk
Combining foods at meal-times helps to make sure you get all the parts of protein (amino acids) that are needed. For example, eating grains and legumes in the same meal (e.g. rice and black beans) makes a complete protein.
2) Having enough iron: have a widely varied diet including wholegrains, vegetables, fruit, pulses and nuts which all contribute to iron.Avoid having tea or coffee with your meals as it interferes with absorption of iron.Include bright coloured vegetables and fruit with your meals (high in Vitamin C) as this enhances iron absorption.
3) Having enough calcium: many people have dairy milk products as their main source of calcium. If you are avoiding animal products, eat plenty of green veges (including cooked broccoli), nuts, dried figs, and tofu. Choose calcium fortified nut/seed/grain/soy milks and fortified wholegrain cereals as well.
4) Having enough Vitamin B12: this is a very important nutrient for nerves transmitting their signals and for forming blood cells. Unfortunately, it’s mainly found in animal products (eggs and meat) so it can be difficult to get enough. Eat foods which are labelled as having B12 added to them (some plant milks and cereals) and consider taking supplements. Have your doctor keep an eye on your blood levels.